Parking in Vancouver is the pits.

You roll up on a street, hoping you can find a spot, only to have to circle the block and settle for a spot that’s *relatively* close to your destination. Thankfully, I have commercial plates on my news truck and–believe me–sometimes it really gets me out of a jam…

…and sometimes, it gets me into one. Such was the case on Wednesday morning, when I decided to park in a downtown commercial parking zone:

I don’t know why someone would park THAT CLOSE. It’s just ridiculous.

There wasn’t much room between my truck and the van in front, so I was really hooped. With the help of two passing strangers I got out of this mess, but it got me thinking about #ParkingWars and some of the crazy things drivers do, all in the name of a convenient parking spot. We can do better, folks.

In every one of the Canadian cities I’ve lived in, the Folk Festival always has a loyal following. The music lovers who reminisce about the days of vinyl and when music was really, you know, music–not the stuff kids listen to today.

I didn’t get the chance to take in the Vancouver Folk Festival this weekend, but I did cover opening day on Friday. The story was about the challenges the festival has faced and how they’ve managed to weather the storms…

…but my colleagues told me my best opportunity for video would be the (so-called) Birkenstock 500. Apparently, when the gates open on the festival there’s a mini-stampede of devoted festival goers who race to the main stage, all of them eager to claim a coveted front row seat.

That wasn’t the case this year, though. The team at the gate told me they wanted to avoid the mini-stampede this year, so they decided to let folks in one at a time. Unfortunately, the electronic ticketing system decided to grind to a halt right as the clock struck 1:00pm.

After about 20 minutes or so, the ticketing system decided to cooperate and they were able to get these eager festival goers streaming in at a faster pace. For the most part, they were all pretty zen about having to wait in line–only one man lost his cool (which was immediately frowned upon by many in line).

This was probably the most fun, interesting and visual story of the week.

In what is truly a race unlike any other I’ve seen, 400 uber-fit men and women set out to climb–as fast as they can–to the top of the Whistler ski jump. This is what it looks like from down below:

I cannot imagine how grueling this must have been on their bodies. They dug their hands and feet into the parched grass. I’m convinced the only things propelling these competitors forward was sheer will and a thirst for glory–is there anything better than getting to the top with a record-setting qualifying time?

I can do a few things in 3 minutes and 53 seconds. Among them:

That’s about it. (NB: climbing to the top of a ski jump isn’t on the list).

The race’s co-director joked that, next year, there might be a media climb. I wonder how many of my colleagues would be willing to huff and puff up that hill… 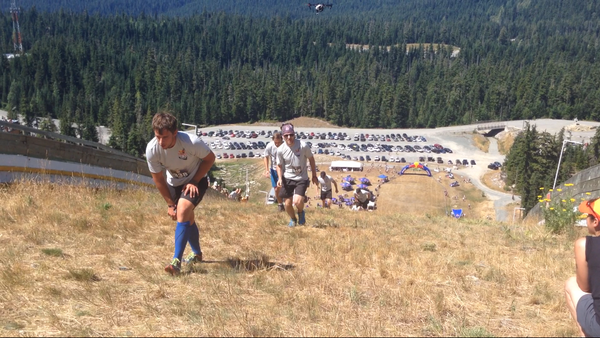